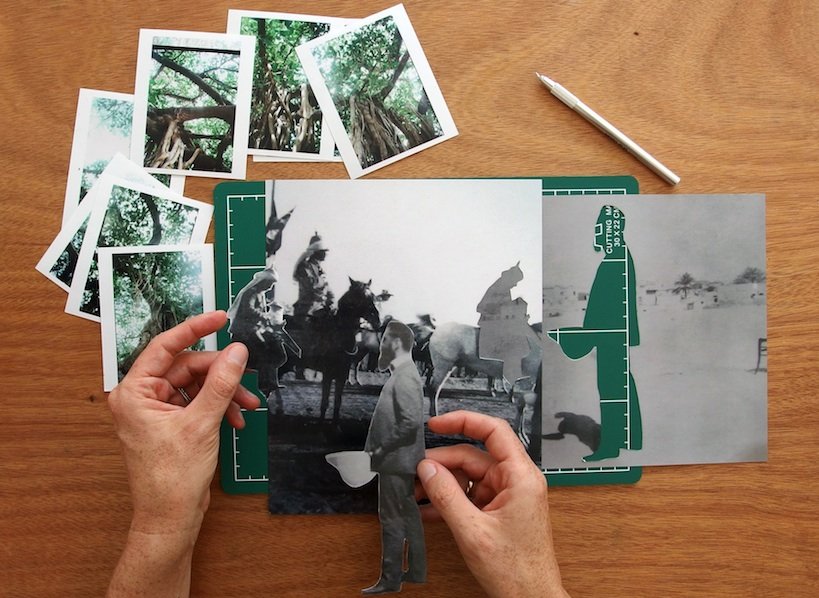 A Bengali Ficus, a German Emperor and an Ardent Zionist Encounter a Poor Photographer

The Bengali Ficus is a very intriguing and powerful tree. Native to India it can be found in Israel since the late 19th century. It grows on other trees and sends out arial roots which swing freely and get their nutrition from the humid air. Once a root has reached the ground it grows very quickly into a trunk itself. The tree can become a huge canopy. In 1888, a Bengali Ficus was planted at the Mikve Israel, which is known as the first Agricultural school in Palestine founded in 1870. At the time, there were just 13,000 Jews in Israel, living in crowded quarters in cities like Jerusalem, Tiberias, and Tzfat. The agricultural school was one of the first attempts to bring urban Jews to start working the land.
In 1898, a very prominent meeting happened next to the Bengali Ficus, which was then only ten years old: The German Emperor Wilhelm II visited Palestine and rode by the Mikve on his way to Jerusalem. Knowing of this, Theodor Herzl also decided to travel this land, as he hoped to plead the case of the Jewish state with the Kaiser as he heard that he was favorable to the idea of establishing a Jewish homeland in Palestine. Herzl had it all planned out and felt that this could be a moment of big importance, so he asked his friend, David Wolffsohn, who traveled along with him to Palestine and Istanbul, to capture this meeting in a photograph. But Wolffsohn was distracted and thus only photographed the Kaiser on his horse with a fellow man. The left foot of Herzl was to be seen on the picture, and that was it.
The reception turned out frosty and nothing came out of the meeting which was meant to be crucial for the young Zionists as the Kaiser was not willing to upset his allies. Nevertheless Herzl felt, that this moment - and therefore the photograph - could be of some future importance, so he forged the now famous image by adding himself next to the Kaiser.

The Bengali Ficus in Holon is still there today and has reached the size of a small house.